Do Something First After Fifty

Posted by Janet Fraser on October 2, 2013 in Firsts After Fifty 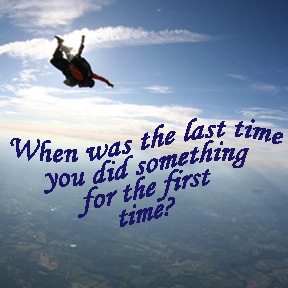 Having said that, biology does dictate some things in life, and one of those things seems to be Move Or Die. I believe this applies to all kinds of pursuits, not just physical ones, so I’ve adopted an attitude of thinking twice before saying “I don’t do…” when discussing just about anything I’ve never done before.

Through good fortune and hard work I’m healthy in body and in mind. Because I’m able to do just about anything I want to, I’ve started a list of the things I’ve First After Fifty. You may not think much of that; you probably do stuff for the first time every time you get the chance, regardless of your age. You probably started heli-skiing or took your degree in theoretical physics after you turned 50. But for me doing something first after fifty is a Big Deal.

People around my age have been brainwashed into thinking that 50 is pretty much the top of the hill. Once we hit 50 we’re going nowhere fast. So it’s unusual for someone my age to believe she can avoid growing old and actually stay at the top of the hill by changing her mindset. At least not without being some sort of freaky fanatic about a specific method for staying young; a method like starving yourself, or getting regular transfusions of “younger” or “better” blood. See, I’m not one of those people who think you can prolong your life forever by some kind of strict regulation of your behaviour. That sort of stuff is just crazy talk.

Notice I said growing “old” not growing “older”. I know I’m going to die, but not today. No not today. And not any day soon, either. What I do know is that people close to me have become old before their time because they believed they were old. They believed it so blindly and completely that they stopped doing stuff they’d been doing for years, let alone trying something new. If I ever say “I’m too old to do that”, please, somebody, slap me. That is simply not a valid reason to do or not to do something.

My husband (yes, I use that word because it says what I want to say, I’ll soon get around to writing a post on Gender Specific Language) and I are reading Younger Next Year, a book that’s helped me put my thinking into words. Take a look; you may enjoy it.

So, raise a glass to doing things for the first time in that golden age after turning 50 years old!

Let me know what you’ve done at an age when most people would have given it up. I’ll start “Firsts After” lists for decades when any Friend of the Blend does something new that no one would expect them to do for the first time at that age.